ITHF Interviews: Bjarne Axelsen on Changing of the Guards

The 2014/2015 season culminates this week with the World Championships in St. Petersburg, Russia. But this weekend also symbolizes the end of an era for the ITHF, whose president Bjarne Axelsen is handing over to his successor, Simon Thomas, who we interviewed in April. It is therefore more than fitting time to acknowledge Bjarne's work for the table hockey community and to find out about how he looks back on his presidential days.

Bjarne, how many terms have you actually served as a president of the ITHF?

I have served 4 terms (elected in 2008, 2009, 2011 and 2013). I am the only person who has been the member of the Executive Committee since its very beginning in 2005 in Riga, Latvia - and then 7 years as a president. A lot has happened in the last 10 years. There were many discussions and sometimes a bad atmosphere between some countries and players in the good old days. Now it is much better, but it is still important to have leaders who know and respect the rules and are able to make neutral decisions. 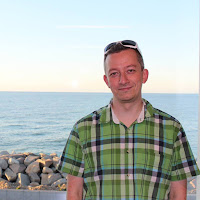 I know you as a keen traveller who does his best to meet table hockey players all over the world, playing at various tournaments. It must have taken up a lot of your life…

This is correct. I have had the chance to plan a lot of my working time and spare time because of my job as a leader of the radio station from 2005 to now. Sometimes I used the evening before a tournament to work a little in the hotel or hostel in order to have the necessary amount of time to travel again the weekend after  In the autumn 2012 I travelled 7 weekends in a row to Swiss Open, Kosice Open, Istra Open, Helsinki Open, Canada Cup, Slovenia Open and Nove Zamky Open. I felt like a real professional travelling all over the world from tournament to tournament  I admit it was quite tough to land in Denmark Thursday morning after visiting Toronto, Canada with Anette [Engel] and then the next day travel to Croatia with Michael [Toft-Nielsen] in order to take the train from Zagreb to Kranj in Slovenia in order to play Slovenia Open. However, it was very funny and I managed to win 3 of these 7 tournaments + two silver medals. I have played around 170 tournaments outside Denmark from 2004 to 2015. It is very important for me to travel and communicate. I wanted to base my decisions in the Executive Committee of ITHF upon facts. A politician – also a table hockey politician – must travel in order to learn how the table hockey world is working outside his own country.
… but now it's over. What are you going to do with all this free time?  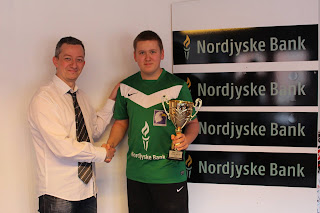 I will still travel as much as possible but now also to other destinations than table hockey destinations. I need to see beautiful places where table hockey is not being played – yet. Moreover, I have two jobs at the moment: I am the CEO of the radio station and I am teaching Danish to people from 20 different countries when they arrive to Denmark as refugees. In this way I am still working with many cultures and talking with people from many countries - which I like very much. Moreover, I still plan to play some tournaments in table hockey - I love the atmosphere. The organizers could perhaps benefit from my help, so they are very welcome to ask me. Also, we are working on several projects with DBHU (Danish Table Hockey Union). We organize tournaments all around Denmark and we have managed to attract some sponsors, which is now bringing prize money into table hockey in Denmark.

So the situation in Denmark is looking very good?

We have a good group of young players plus a series of tournaments with prize money. We have decided to do it like many other sports. We organize open tournaments, but new players or players on lower levels need to qualify in order to play in the “professional” category. Of course it is great that a person from the street can walk into the arena and play with Maxim Borisov but in a way it is also quite unprofessional. This would never happen in another sport. If we want media attention, sponsors and prize money (and I do not know if this is what the world wants), we need to make tournaments only for players with a certain level – in my opinion. 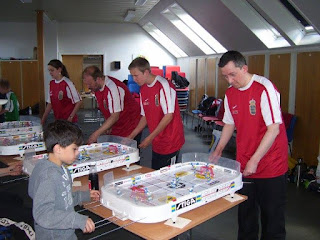 We have two big challenges in Denmark. Many children and their parents do not look upon table hockey as a sport. In ITHF we need to decide: do we want to stay on the level we have now OR do we dare to make the necessary changes and put demands into our sport in order to make table hockey a well-known sport? When I visited Moscow Open and then told our people about the prize money for the 19th place, I saw a growing interest among young players.
The other problem for Denmark is tournaments held in May or June. May and June are very important months with many examinations in Denmark. It is almost impossible to move the examinations (I understand this is not such a big problem in some other countries) and moreover you need STRONG arguments when explaining parents that they should contact the high school in order to move an examination because of table hockey. We need more prestige in table hockey: TV stations, sponsors and prize money in order to convince parents that table hockey is a real sport – like tennis, table tennis, badminton etc.

So what do we need most in the future? Money, publicity, full-time organizers, first-rate tournaments, or more players...? 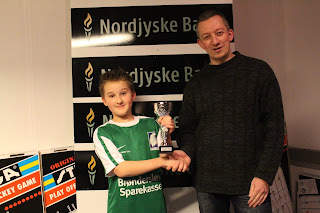 The answer to this question depends on what we want. If we want to travel and visit each other, fight for trophies and have fun – we can already do this. If we want to move to a level like other sports we need to award the best levels in the World Table Hockey Tour to the organizers who manage to organize professional tournaments. The attention of mass media is really necessary if we want more results with table hockey than the level we have already achieved. But it is my impression that most of the member federations are satisfied. In that case, there are not many challenges left for the future members of the Executive Committee – except making a great ITHF WTHT Calendar, updating the World Ranking etc.

But I am very inspired by the job being done in Russia and Latvia. If we want more publicity than we have now, we must learn from them. This rift between “Keeping it as it is” and “We must develop our sport” is the biggest challenge for the future Executive Committee. I believe we should put more demands on the level of WTHT Super Series tournaments. This level should be awarded to all the professional organizers – and only the professional ones. National borders should not be the most important fact when awarding World Tour levels. The most important aspect should be the level of organization, number of players, number of participating countries, facilities in the arena, prize money, media etc. In other words - PROFESSIONALISM!

Your playing style shows a lot of concentration, determination and energy. Who inspired you most as a player? Has your style ever changed throughout your career? 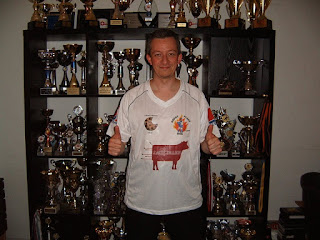 I began when I was 29 years old. This was my biggest challenge. I wanted to do my best and try to achieve some results and win tournaments in different countries. In Denmark, I could never practise my defence and it was easy to score goals from every angle using many different combinations and shots. However, I managed to attract many young players in Denmark and they had the time of their lives when playing at the World and European Championships, Swedish Masters, Oslo Open or perhaps in Kosice or Kapolnasnyek in Slovakia or Hungary.

However, I began at the same time as many of the best young players. I admire many of them very much. They are so technical and fast - this is impossible for me. I must concentrate very much in the defence in order to stop my opponent. Moreover, I must use every small chance in order to score goals because fast combinations with many passes are not easy for me. My style has not changed dramatically but step by step I learned more details and tricks. I have had the chance to spend a lot of time playing table hockey and talking with people in all the countries and to learn a lot in this way – not only about playing, but also about their views on table hockey and organizing tournaments. Very inspiring!

If a newcomer asked you about what you need to be best at table hockey, what would you say? 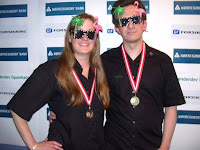 I would recommend a newcomer to study the best players and be inspired. Sit down and watch the play off matches between the best players, go home and practise and prepare for the fact that centre moves are very important. Some years ago I played a tournament in Switzerland. I was winning in quarterfinals against Martin Ženíšek (APP Gladiators Plzeň) by using the centre move a lot. He told me: “Do you know that there are other combinations than this one?”  He was completely right. It was boring and it is sometimes boring to watch the international top level. However, one month later Martin asked me whether I was ready to play for Gladiators in the Czech Team Championship - which made me very happy and our team won the bronze medal on 29th May 2011. Team Championships are the tournaments I like the most.

Final shot: who's going to be the 2015 World Champion?

Maxim Borisov (Russia). With Edgars Caics, Atis Silis and Yanis Galuzo as my other favourites for the semifinals, but there will be surprises. It could be Jan Pelkonen, Hans Österman, Benjamin Gerasimov or Dmytro Litvinyuk.

Bjarne, thank you very much for the interview and for the incredible work and effort you put in table hockey. Have fun in St. Petersburg!

As a little bonus for those of you who do not check the ITHF Website on regular basis: her is Bjarne's last Christmas speech of 15 December 2014. 8 minutes of comments, insights and food for thought...